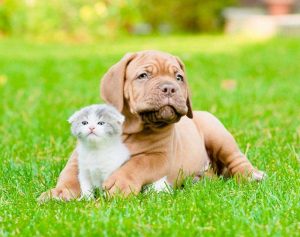 Did you know that Easter holiday celebrations pose certain dangers to your pets? With this holiday seemingly always on the horizon, this is a great time to mention the safety hazards this holiday can pose to your pets. Including your dog or cat in your Easter celebration can be fun and rewarding, because let’s face it- there’s aren’t too many things cuter than a dog wearing bunny ears, but being aware of the potential hazards that crop up during this time of year can allow everyone to participate safely.  The following are the top 6 Easter hazards for pets:

Lilies: While these flower can make a beautiful addition to your home during Easter it is very important to realize that lilies are extremely toxic to cats. Toxicity occurs after your cat has eaten or licked a lily, and it’s no secret that cats LOVE to eat plants. The severity depends upon the type of flower. Peace, Peruvian, and Calla lilies can cause minor symptoms such as mouth irritation and vomiting, while Tiger, Day and Easter lilies (among other varieties) are much more potent and can result in severe vomiting, diarrhea, kidney failure, seizures and death.

Chocolate: Chocolate is toxic to both dogs and cats, though dogs are much more likely to eat it than cats are. The darker the chocolate the more theobromine it contains and the more dangerous it is. White chocolate is relatively safe, while dark or baker’s chocolate holds the biggest potential for life-threatening problems. If your dog has ingested a toxic amount of chocolate symptoms can range from hyperactivity, increased heart rate and vomiting to seizures, coma and death.

Candy and wrappers: Candy typically contains a lot of sugar which can cause generalized stomach upset resulting in vomiting or diarrhea. Unfortunately, in their haste to get to the good stuff, most pets will ingest the wrapper along with the candy. Lots of plastic wrappers can sometimes cause an intstinal blockage which keeps anything from passing through their system. This is an emergency situation that usually requires surgery to fix. Symptoms of an intestinal foreign body can include inappetance, fever, abdominal pain, repeated vomiting and sometimes diarrhea.

Gum: Certain types of gum contain an artificial sweetener called Xylitol, which has the potential to be extremely toxic to dogs and cats. Just two pieces of gum can cause death in a 60lb dog! Xylitol causes an immediate and drastic drop in blood sugar, resulting in a critical situation. It can also be toxic to the liver. If your dog ingests Xylitol they must be seen IMMEDIATELY by a veterinarian. Symptoms can include incoordination, or difficulty standing and walking, lethargy, trembling, seizures or a yellow-hue to the skin.

Plastic Grass: Although plastic grass looks great in Easter baskets it poses a big risk to your pets. Cats are most likely to try and play with the plastic grass and often end up ingesting it. Once ingested it often gets tangled up in the intestines and stomach and causes what is known as a “linear foreign body”. This plastic grass has been known to cut through the intestines and cause a life-threatening systemic infection. Symptoms of a linear foreign body can include repeated vomiting, inappetance, lethargy, fever and sometimes bloody diarrhea.

Ham: Cooked ham itself is not toxic to your pets although it has been known to cause general GI upset such as vomiting and diarrhea in dogs and cats. Extremely fatty foods can also cause pancreatitis. The major concern with ham is that your dog or cat will ingest a cooked ham bone. While raw bones are very sturdy, cooked bones tend to splinter and can get stuck in the intestines or even poke through the GI tract. It is NEVER recommended that you feed your dog or cat any type of cooked animal bone.