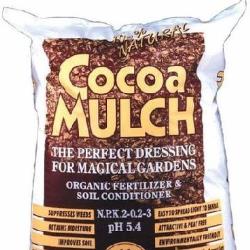 How Dangerous is Cocoa Mulch to Dogs?
Many of us take some time during the summer to enjoy gardening or landscaping around our homes. While most varieties of mulch are relatively safe for our pets, cocoa mulch can be very dangerous—even fatally toxic if ingested. Cocoa mulch is known for its rich brown color, insulating and hydrating properties and chocolate aroma- making it an appealing option for many gardeners. Unfortunately, cocoa mulch is produced from cocoa shells and contains theobromine and caffeine- the two elements in chocolate that make it so toxic to our canine friends.

The severity of the toxicity is directly related to the amount of theobromine ingested. Milk chocolate contains approximately 45mg/oz of theobromine, while dark or baker’s chocolate can contain up to 600mg/oz of theobromine. Many varieties of cocoa mulch have been shown to be even MORE concentrated in theobromine than even baker’s chocolate (up to 1300mg/oz). In addition, in areas where cocoa mulch has been used there is typically a nearly endless supply of material- making the likelihood of severe toxicity much higher. Toxic doses start at 100-250mg/kg. This means that a 60lb dog would only have to eat less than 3oz of typical cocoa mulch to have ingested a toxic dose.

Theobromine poisoning can cause vomiting, hyperactivity, increased heart rate, increased blood pressure, muscle tremors or spasms, seizures, and hyperthermia. Severe cases of toxicity can result in death from cardiac arrhythmias or malignant hyperthermia due to uncontrollable seizures. The other aspect of theobromine toxicity is that it takes dogs much longer to metabolize this compound than people. After approximately 18 hours about half of the toxin is gone from your dog’s system.

Treatment of this toxicity is essential and has a much better prognosis if it is started as soon after ingestion as possible, with symptoms usually beginning 1-4 hours after the incident.

When you bring your dog to see the veterinarian for possible cocoa mulch toxicity your veterinarian may initially attempt to make your dog vomit. If too much time has passed since ingestion your dog may be fed activated charcoal, a black substance that binds toxins in the stomach, preventing further absorption into the blood stream. An IV catheter is usually placed in order to promote hydration, increase excretion of the toxins from the body and correct electrolyte imbalances that may occur from vomiting. More serious symptoms such as tremors and seizures are usually controlled through IV drug administration.

Symptoms have the potential to last for 36 hours. If treatment is started soon after ingestion and some or all of the ingested material is removed the prognosis is usually relatively good. Dogs that develop seizures and cardiac complications have a much more guarded prognosis for recovery. If you have dogs, always make sure that the mulch you have chosen to use around your home is NOT cocoa mulch. Also keep in mind that if your dog runs off and begins to show any of the above mentioned symptoms it is possible that he/she ingested cocoa mulch from some other source. This is a very serious issue and should be treated as an emergency. If you have any questions regarding cocoa mulch toxicity please call River Road Veterinary Clinic at (802)649-3877.