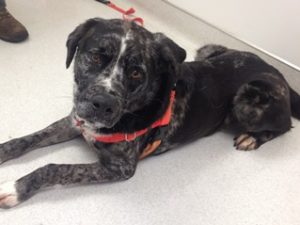 [From our Case of the Month Files] Ferris, the Australian Shepherd mix came in to see us last week after the pet sitter had seen a metal object dangling out of his mouth. When she moved toward him to retrieve it, Ferris swallowed it in one swift gulp. Many times, in a situation like this where an owner observes their dog ingest something inappropriate, they will choose to induce vomiting at home. This is done using a weight-based dosage of Hydrogen Peroxide given by mouth. Most dogs respond to this treatment well and will vomit up the object in question (although seeing a veterinarian is always a safer option since in rare cases Hydrogen Peroxide can cause ulcerations in the mouth, esophagus, or stomach.) Unfortunately, because we were unsure what the object was, and if it had sharp edges that could cause lacerations in the esophagus, having Ferris vomit at home was not an option

Ferris’s owners arrived at River Road Veterinary Clinic shortly after, where we decided to take a radiograph, or x-ray. In order to show up on an x-ray an object must be “radio dense.” Radio dense objects include metals, bones, rocks, etc. Since we knew at least part of the object was metal, we were hopeful that we’d be able to see what was sitting in his stomach.

A lateral radiograph of Ferris’ abdomen revealed an impressive picture. What we saw sitting in his stomach appeared to be some sort of radio dense ball keychain/clip. It didn’t appear to have any sharp edges, but was fairly large so although it was safe to try and make Ferris vomit we weren’t convinced he would be able to vomit up the object.

In order to make Ferris vomit here at the veterinary clinic we gave him an injection of a medication called Apomorphine. This medication induces vomiting very quickly and is effective in almost all dogs. As we gave him the injection, we crossed our fingers that it would work. If Ferris was unable to vomit up the object that would mean he would require immediate surgery to remove the object from his stomach. If the object was not removed surgically there would be a good chance it would cause an intestinal blockage that could eventually lead to infection, sepsis and potentially death.

Within seconds Ferris began salivating, and after a few failed attempts he was able to successfully vomit up the object! It was a huge relief for our staff, not to mention his owner! Once we were able to see the object it was immediately clear that Ferris had made the poor choice to eat a clip-on blinking safety light.

Ultimately, it was a happy day as Ferris was able to go home several minutes later and was able to avoid an emergency surgical procedure- something both he and his mom were thrilled about. Although we love seeing Ferris’ adorable face here at RRVC we’re hoping that the next time we see him it’s for something a lot less stressful!