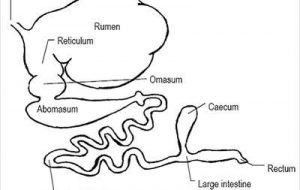 Cows do not chew their food in the same way as dogs, cats or humans. The unique anatomy of their mouth allows them to occasionally pick up foreign objects with their feedstuff. These foreign objects often include wire, screws, nails, and other various metals found on the farm and in the fields. When digestion of a heavy foreign object occurs the cow can get what is known as hardware disease.

To fully understand hardware disease, it is important to know the basics of a cow’s digestive system. Cows have 1 large stomach that contains four compartments, the rumen, reticulum, omasum, and abomasum.

Rumen: This is the first and largest compartment in the cow’s stomach. Cows don’t normally chew their feed for a long period of time instead they coat the feed with saliva and use a side-to-side grinding motion to crush it with their molars before swallowing. When the feed enters the rumen fermentation occurs, enabling the cow to digest the fiber in the feed. The rumen contains billions of bacteria which are responsible for the fermentation and digestion process.

Reticulum: The reticulum is honeycomb shaped and acts as a filter for the larger feed particles. The main job of the reticulum is to ensure that the larger feed particles don’t enter the next compartment of the stomach. The honeycomb structure of the reticulum picks up larger particles and sends them back to be regurgitated, re-chewed, and re-coated with saliva. The part of the feed that makes it through the filter moves on to the omasum.

Omasum: The omasum contains many folds that squeeze the water from the feed, so that the water doesn’t escape into the rest of the digestive tract.

Abomasum: The abomasum is the final compartment in the stomach, and it is the most similar to the human stomach. It has a low pH and contains enzymes that digest all the remaining proteins in the feed so the nutrients can be absorbed by the small intestine.

When a cow swallows hardware it gets caught in the second compartment of the stomach: the reticulum. The contractions of the reticulum are what make hardware disease deadly. If clinical signs of hardware disease are seen in a cow the veterinarian should be called immediately. The contractions of the reticulum are sometimes forceful enough to cause the foreign object to puncture through the stomach. This can be deadly for several reasons: the foreign object can wreak havoc on other vital organs such as the heart and lungs or the cow can become septic due to the bacteria-ridden semi-digested feedstuff and rumen fluid leaking into the abdominal cavity through the puncture.

Clinical signs vary depending upon where the hardware penetrates. They can include pain, decreased appetite, arched back, reluctance to walk, audible grunting when forced to move, inflammation of the Vagus nerve which can cause bloat (specifically on the upper left side), and fluid accumulation on the lower right side of the abdomen. It is important to remember that not all clinical signs are present in all cases of hardware ingestion.

Diagnosing hardware disease can be tricky and it is difficult to be 100% sure that hardware ingestion is the cause of the symptoms. One commonly performed test is called the withers test. This diagnostic test is done by squeezing the cow‘s backbone just above the withers, if the cow grunts in pain then it is most likely a hardware cow. The best way to determine if hardware ingestion has occurred is to use a metal detector, which Dr. Pinello has used successfully in the past to make an accurate diagnosis.

After the detection of hardware a magnet is administered to the fore-stomach of the cow using a balling gun. In some cases the rumen will stop contracting due to damage of the vagus nerve by the foreign object. If this has happened the magnet will not be able to make its way to the reticulum in order to catch the hardware. These cases have a much more grave prognosis. Antibiotics are also administered along with the magnet in order to control potential infection.